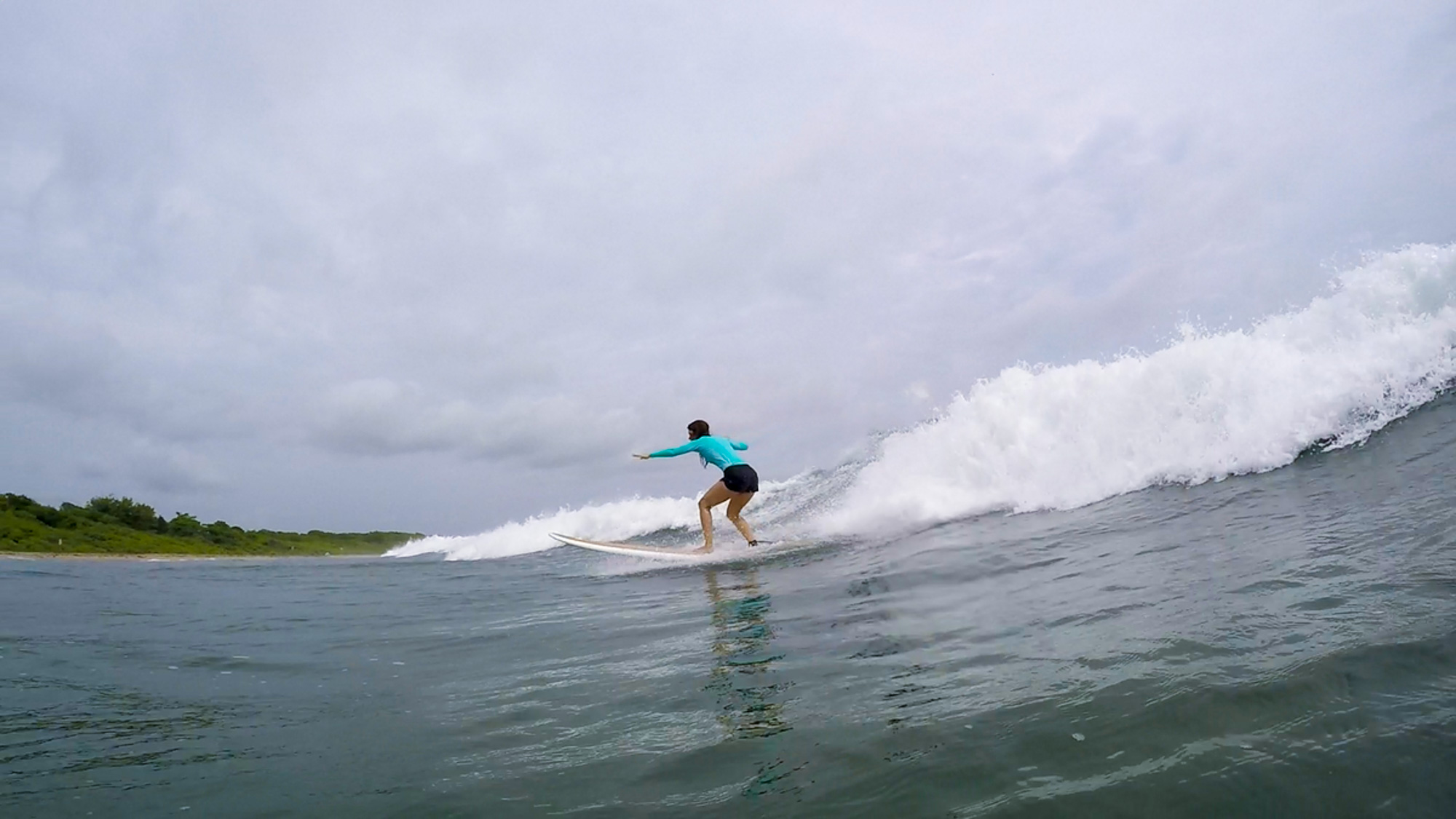 We’ve been home from Costa Rica for about a week now, and the water is finally starting to seep from my brain so I feel motivated to work again. My head has been so far in the clouds! Part of the reason why I haven’t finished any articles on my to-do list yet is that I know the first one needs to be about Witch’s Rock Surf Camp, where we stayed, and how do you fit a whole week into 500 words or less? Let’s try.

Witch’s Rock Surf Camp is amazing. There’s plenty to love about the surf hotel and Tamarindo, but I’ll start with the surfing, which is what I went there for. I’m not a very strong surfer, so I started off with the beginner clsssds while Chris did the intermediate tour. The beginner classes are tiered to a week-long schedule where you learn how to pop up in white water, paddle out, catch a wave and go straight, turn, and walk on the board (yes!). I want to learn how to dance on a longboard someday.

Luckily, I ended up with the coolest surf instructor on the planet, Johan Rojas. I heard he may be the best longboarder in Tamarindo, and I’ve seen it with my eyes so that may be true. He may also be the best surf instructor in Tamarindo. He has a really good eye for technique. Before going out for the day he will draw pictures of waves in the sand to help explain what you are supposed to do with different types of waves. Since I’m a super visual learner, this helps me remember what to do when I’m out there. Although paradoxically, one of the most helpful things is to try not to think about what you’re doing at all. So, focus and don’t focus.

All of the surf instructors at Witch’s Rock are very patient while you progress, and will help you catch the right wave for you. During a lesson you may be paired up with a couple of other people who are at your same skill level, which is a nice way to get to know other bold travelers and give your arms a rest when you’re out on the water.

Hey, I finally learned how to surf ok! Some days were bigger than others.

There were a bunch of other cool instructors to work with at Witch’s Rock, like Manrique, who helped me catch this super enormous wave. Wow, thanks!

And Rafa Sandoval, who helped me learn how to turtle roll, has a good eye for what you’re doing, and will give you lots of pointers for how to improve.

Maxy, the kindest man, working in the board cage, who sends us out to the waves with a little magic wax.

Of course, Chris surfed amazingly as always. The intermediate tour takes them by boat or car each day to wherever the waves are the best. It’s pretty convenient the way they do the work of looking up the waves and weather patterns for you, and arranging transportation.

In addition to surf lessons, Witch’s Rock includes surf seminars where they explain things like surf safety and etiquette, how to paddle, surf fitness, history, how waves are formed, and even a board shaping seminar with surf legend Robert August. Every couple of days there is a video analysis, those moments of sweet honesty where you get to see how silly you look surfing and the instructors help explain what you can do to progress. They’re very kind.

Witch’s Rock includes a complimentary breakfast. Eat it after the surf session! The first day, I went out with food in my stomach and wanted to take a nap more than paddle. Snack on a Clif Bar or something like that before the surf session instead. You’ll be super hungry after surfing, and their breakfast is a big plate. I recommend the Classic Pinto – eggs, black beans and toast every day is so delicious.

There are beach lifeguards at this stand.

There are a few other perks to mention about Witch’s Rock. For starters, their vans will easily drive you to and from the airport in Liberia. The shuttle takes less than an hour, and we felt totally safe. I was a little worried about traveling internationally since this was my first time out of the country in about 18 years, but there was no cause for concern.

It gets dark pretty early in Costa Rica year round, but the sun rises so early. I’m happy to rise and rest with the light, the same as in Houston. Most days I wake up with the sun, have coffee and go for a walk enjoying the cool air and scarcity of people. The sunsets aren’t bad, either.

Anyway, we would go back in a heartbeat. I’m sure everyone feels this way. The city is heavy and crowded, and everything about Costa Rica is so cute.

If you want to try surfing, here are a few really important things to know:
Be safe. The ocean will not get tired before you do.
Don’t be afraid. There’s no time like the present.
It’s ok to look foolish. Everyone has to go out for the first time. Just make sure your suit is tied on tight!
And most importantly, never let anyone be the thief of your joy.