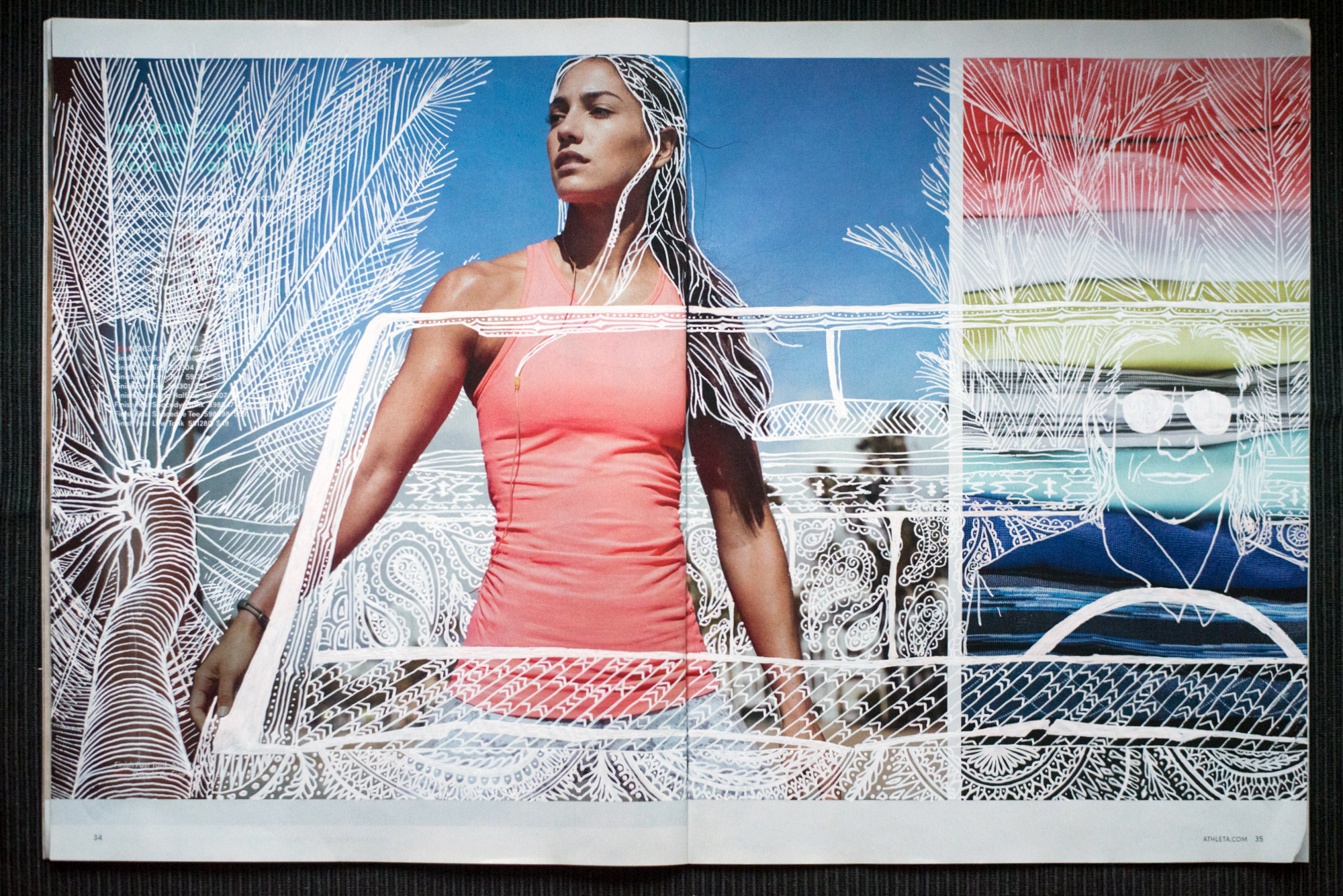 I spent too much time this weekend working on this drawing of a song I heard. It was probably worth it. When I was about 3/4 of the way through, I indignantly said to Chris “where did all of my ink go” since the pen was almost empty. He looked at the paper and replied, “It’s on the page”. Yes. It is. Lots of lines. Love these white opaque uniball pens for drawing on magazine paper. It’s a good thing I have 3 (well, now 2) of them.

If you make it through this whole article, I’m impressed. Having a good grasp of the cultural narrative is super important for everyone interested in yoga or teaching yoga in order to understand the nuances of the common yoga metaphors. It all started with this song.

What was the song?

It’s a super campy narrative jazz piece by pianist Brad Mehldau and drummer Mark Guiliana that came on my Spotify at work. These musicians are traditionally more acoustic, but this song is a dream journey with each spoken word stanza punctuated by moments of jazz improvisation. In the dream, the narrator rides through LA in a convertible steered by an old hipster version of Joe Walsh/Dennis Hopper. Let’s call him Joe.

As the dream progresses, the vehicle morphs into a VW van and then a spaceship while Joe drives the narrator through this beautiful city. When some random dude comes up out of nowhere and cuts them off, our passenger gets a serious wave of road rage while Joe brings some clarity. It’s a good thing he’s the one driving.

So our narrator realizes Joe was actually taking care of him this whole time, and not the wild party influence he had originally thought. And how when you’re in a dream you may see all of these different people leading you to good or trouble, but they’re actually you. One side of you rages and the other holds steady, and they each try for your attention.

In the song, finding balance is like taming a dragon. You need Joe to keep you on the straights and narrow. In turn, Joe knows the dragon is part of you and not to try to kill it, because that’s where the good stuff comes from. You want to tame and make friends with the dragon, so you can effectively work with his creative energy.

Anyway, Brad Mehldau and Mark Giuliana make a good song. You can listen to it here:

When Chris hears stories like this he keeps coming around to Plato’s chariot, narrated through Socrates. The Charioteer of the human soul drives a chariot pulled by two winged horses. One is noble and the other quite the opposite, which makes steering the thing quite a challenge. The Charioteer is intellect, reason, and guides the soul to truth. The white horse represents rational and moral impulse while the black horse represents irrational passions. The Charioteer steers the entire thing toward enlightenment.

If overcome by the black horse or forgetfulness, the soul loses its wings and is pulled back to the earth. When this happens, it’s incarnated into one kind of person depending on how much truth it understood before falling. There are nine kinds of people in order of decreasing truth: (1)philosophers, lovers of beauty, men of culture; (2) law-abiding kings or civic leaders; (3) politicians and businessmen; (4) bodily health specialists; (5) prophets and mystery cults; (6) poets and imitative artists; (7) craftsmen and farmers; (8) sophists and demagogues; (9) tyrants. Plato uses this allegory to explain that love is a reflection of love of the forms, and thus a “divine madness”.

My only point of contention with Plato is the nine kinds of people. How can you be only one? Can’t a person be both a businessman and a man of culture, a civic leader and an artist, a bodily health specialist and philosopher? People are not so linear.

In Indian culture, there’s also a famous chariot metaphor in the Bhagavad Gita, a central Hindu text. In this tale, the Warrior Prince Arjun prepares for war while talking with the god Krishna about the human struggle for self-mastery. According to this text, it’s a battle against that which causes sorrow – attachment, likes and dislikes, ego. Victory is achieved with the realization of the self, detachment from pleasure and pain, mastery of the senses, and wisdom in action.

Here the Self is again described with the metaphor of a chariot. The chariot is the body, the passenger the soul, the driver the Self, the horses the five senses, the reins the mind, and the road the object of the senses. Krishna advises Arjun to bear pleasure and pain patiently with detachment, as they are fleeting. Take hold of the reins of the mind to control the horses of the senses and guide them in life. Krishna further says to work for the sake of work alone, not the fruits of labor. When this is achieved, anxiety or worry will fade and you can find wisdom in action. The wise can thus draw their senses at will.

This can all come down to the chariot Or vehicle of transportation as a metaphor for the body in yoga, where the body is the vehicle through which your soul (or whatever you want to call it) experiences the world.

During JYU yoga teacher training we learned different types of metaphors you can use for a body: a car, a house, time, the elements, anything. Back in the day, chariots were a really common mode of transportation. But now we use cars. The same metaphor can easily translate to the vehicle of the car. The car is the body, the passenger and driver are the self and the soul, the wheels the mind, the engine the five senses, and the road the object of the senses. In turn, this lends new meaning to the Taming of the Dragon song.

Do you know of any other chariot metaphors, or hear any other mythical references in their song? Where does the taming of the dragon come from?