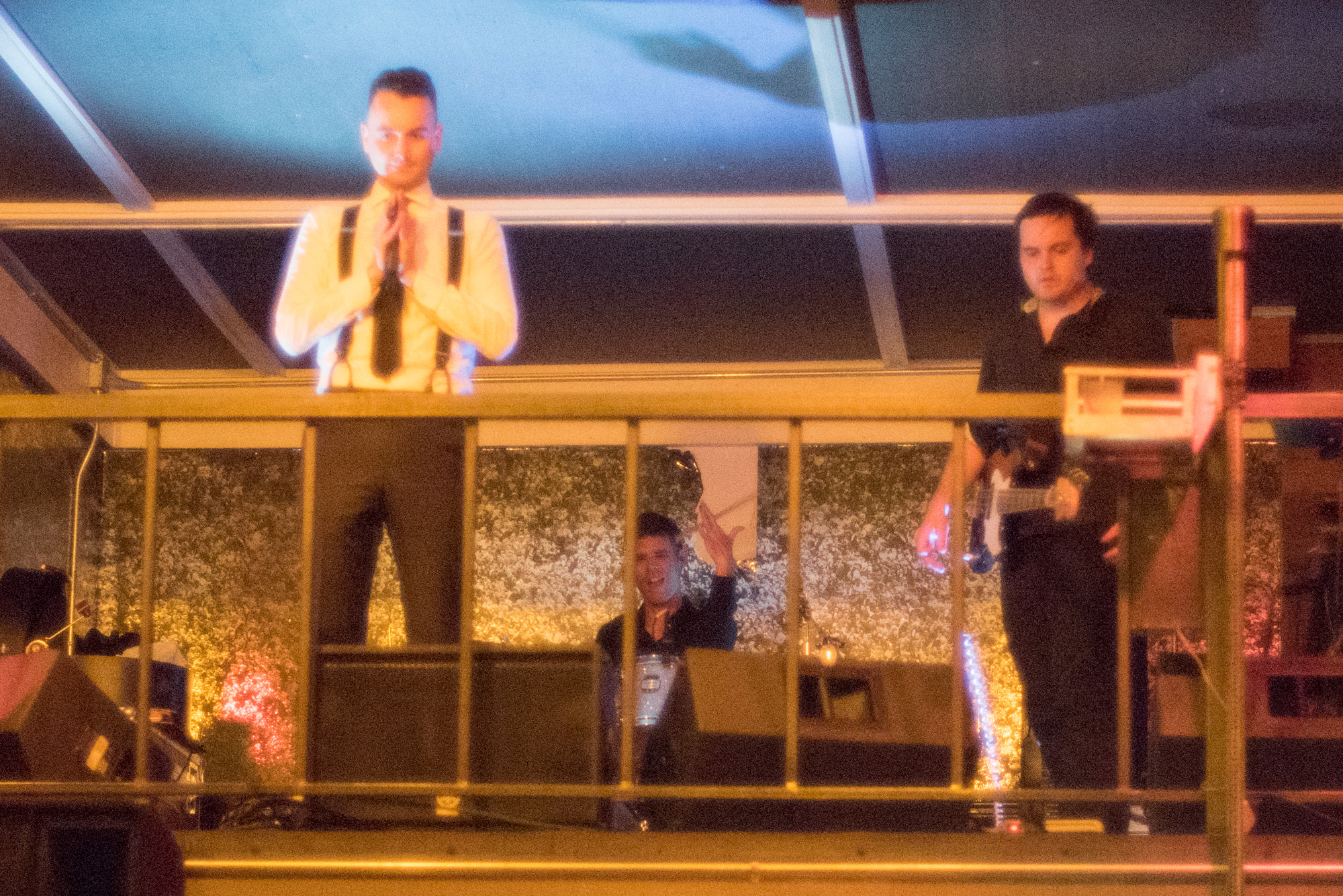 Guess what? Hescher and Night Drive played at the Nightingale Room in downtown Houston last week. Guess who played drums for Hescher? Chris! It was Chris. He’s super badass at the drums. That’s him spinning his sticks.

Chris loves this battery. It will charge his phone forever and possibly jump his car?

They say the sound system is good at the Nightingale Room. The Nightingale Room is one of those old buildings downtown on Main Street between Congress and Preston. There’s still a cobblestone road on the street. There’s so little of Houston that’s actually old. What was the venue before it was this? I don’t remember and maybe I don’t care even though I used to spend some part of nearly every weekend on this block sometime between now and fifteen years ago. Even now, I’m a few blocks down almost every day this month rehearsing for the opera. The buildings downtown look smaller with more people and lights these days. There’s a train. I know the buildings must be the same size that they’ve always been. I’m the same size. I’m not what has grown. Or have I?

Hescher played, and it was awesome. It’s good to see Chris up there again on stage. He says it makes him feel like he’s flying.

Who is Hescher? Hescher is Cory Sinclair’s project, a sound somewhere between the drama of the theatre and the dance pop of the club floor. Cory calls it Cinematic Pop, and you can read an interview with Hescher here. Here Cory Sinclair sings, Chris Landry drums, and the charismatic Tom Bowman plays guitar. The lights looked cool, too – v much drama in the atmosphere. Love the cast shadows.

The bartenders sent the band up water drinks through this neat pulley on the side of the bar.

What does Hescher sound like? It sounds like Hescher. If I were going to make a mixtape with some Hescher songs, I think it might also go well with the XX, My Bloody Valentine, Love and Rockets, and a little Depeche Mode. Maybe an obscure Cure song if I felt like wandering through a park, teary-eyed and in love while wearing a crisp fall jacket.

Night Drive and Hescher both practice in Omar’s (and Chris’s) studio space in the warehouse district. I’ve seen Night Drive around for the past few years, but this was the first time I actually heard them play. One of them lives in Houston, the other in Austin, and they meet in the practice space to make music. Ha – Chris bought one of their tanks at Float Fest last summer and I love the way it fits so I wear it to dance class practically every week. Thanks for the shirt, guys! I get lots of compliments on it.

Night Drive was pretty awesome. You can tell they’ve put a lot of work and life into this project, and the crowd was really amped up about it too. There was dancing – there should always be dancing. The singer kept running down the stairs into a crowd of people who had their phones ready and recording. It was a surreal micro-celebrity moment. Are we even in the present, guys? I’m totally guilty of always having some kind of a recording device out and on, but there were just so many of them.

Here’s a cinematic video Hescher released some months ago. Looking forward to hearing the album when it comes out soon! I’ve been hearing the music pretty often with Chris playing it next to me, and it’s cool to see it all come together live.