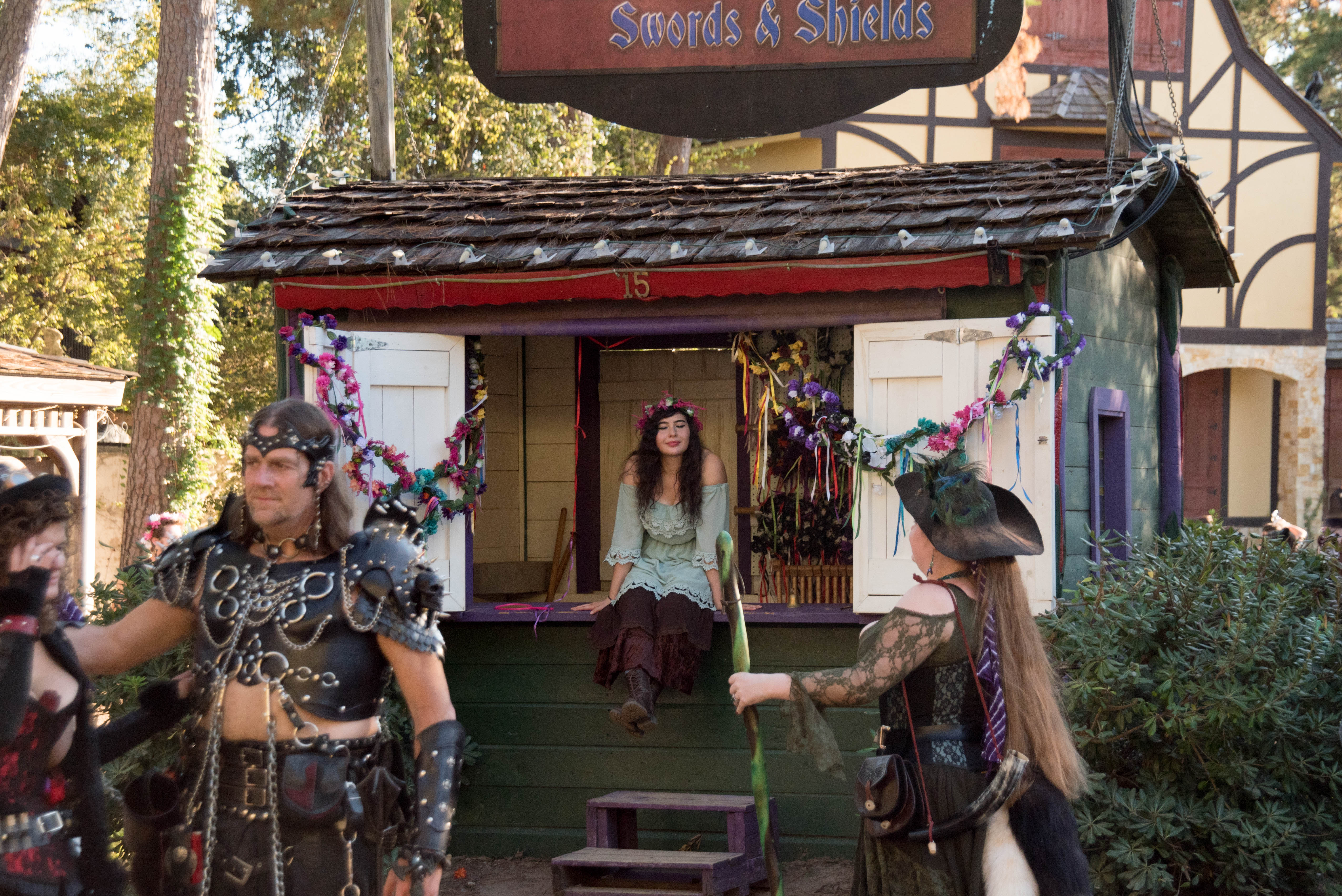 Last weekend Chris and I made it out to the Texas Renaissance Festival, with his friends Omar and Jefferson. If you don’t know what a renaissance festival is, it’s like a little town going back in time. There’s a big gathering of vendors who sell their Medieval-to-Renaissance themed wares including clothing, jewelry, home, and gifts. Even the food includes medieval-style fare like giant turkey legs and mead, although since it’s Texas there was also a fair share of Cajun style foods. The festival is made up of a little community of shops, dining, fairgrounds, and stages for plays and music every hundred yards or so. Check out this map, which I really should have looked at before going. 🙂

Also, everything at the festival is decked out in a medieval festival, including the festival-goers and the festival-workers. People speak in an English accent, or their version of one. Be prepared to be called “mi’lady”, which I’ll take over “ma’am” any day, really. Every weekend there’s also a different costume theme. Last weekend we made it out for the best theme: Fairies! I have to say: I was really impressed by the costumes I saw. The Texas Renaissance Festival has come quite a ways since middle school, when my friends and I used to romp around layered up in glitter, fairy wings and sarongs. However the spirit of the festival is just as authentic as it was then. We should all wear more glitter. It should really be a daily thing.

So, here are a couple of my favorite looks from the weekend. I saw so many good ones!

You don’t have to dress up like a fairy on Fairy Weekend. This guy was a knight, and his costume is awesome! We have to come back for one of the other renaissance festival themed weekends. I’m thinking All Hallow’s Eve, which is in two weeks, so I can wear this amazing black cross-back dress. But the Highlander weekend should be a good one for all fans of Outlander. Hmmm… maybe we’ll make it back more than once.

Of course, one of the best things about the Renaissance Festival is the shopping. A few of my favorite shops include Music of Spheres, where you can buy big beautiful wind chimes. The original storefront is based out of Austin. I was also madly in love with the vintage leather satchels from Poetic Earth. Houston’s Magick Cauldron has a giant storefront near the Sherwood Forest. I believe someone mentioned this is where they keep their warehouse. They did have a really good inventory! There are too many good merchants to mention, but the full list with all of their websites can be found here: Renaissance Festival Artisans. The prices can seem a little steep at times, but the quality of the merchandise can justify the cost.

We randomly ran into my brother Cavalier, who happened to be there with his girlfriend (and some glitter). When he was in high school he used to perform here on weekends singing. He’s actually quite good.

The Renaissance Festival isn’t just for dressing up like a fairy and shopping. The grounds are so beautiful, and they host weddings here year round. The loveliest vines cover a church frame and several garden groves on one end of the festival.

Just past the church, there’s a long path leading into a Fairy Garden/Forest lined with groves. Each nook is highlighted with a sculpture and cozy seating area. They even have a stage for an outdoor dance school! It was so beautiful.

This dress is everything, isn’t it? I should have bought it! You can order it or something else amazing from their online store here: SkyRidge Designs.

Omar bought a sword and dagger in a matching sheath. I wish I could remember the name of the shop.

At the far end of the grounds by the Sherwood Forest there were elephant rides and a giant porch swing Chris and I took a ride on at dusk. They hoist you up with a rope and drop you in a long arc to start the swing. It’s almost like an amusement park ride. The chains holding the swing up are lined in fluttering ribbons, and the apparatus the swing hangs from has real vines winding all the way up it. Toward the end of the swing ride, they give you a little extra push. The ride gave us such a nice gentle breeze that I almost didn’t want to get off!

As dusk started to fall, the shops began to close and we headed back to the front of the festival. Omar found the gypsy he’d been looking for all day. The year prior she had a kiosk, and this year she had built a shop to sell her home and jewelry crystals.

The night ended in fireworks, like every night should. There was a big, full super moon that rose up just as they started to go off. Even though it’s stayed pretty warm this fall, this was one of the most beautiful fall days I’ve seen and I’m so glad we spent it out of the house in such beautiful light and shadows.