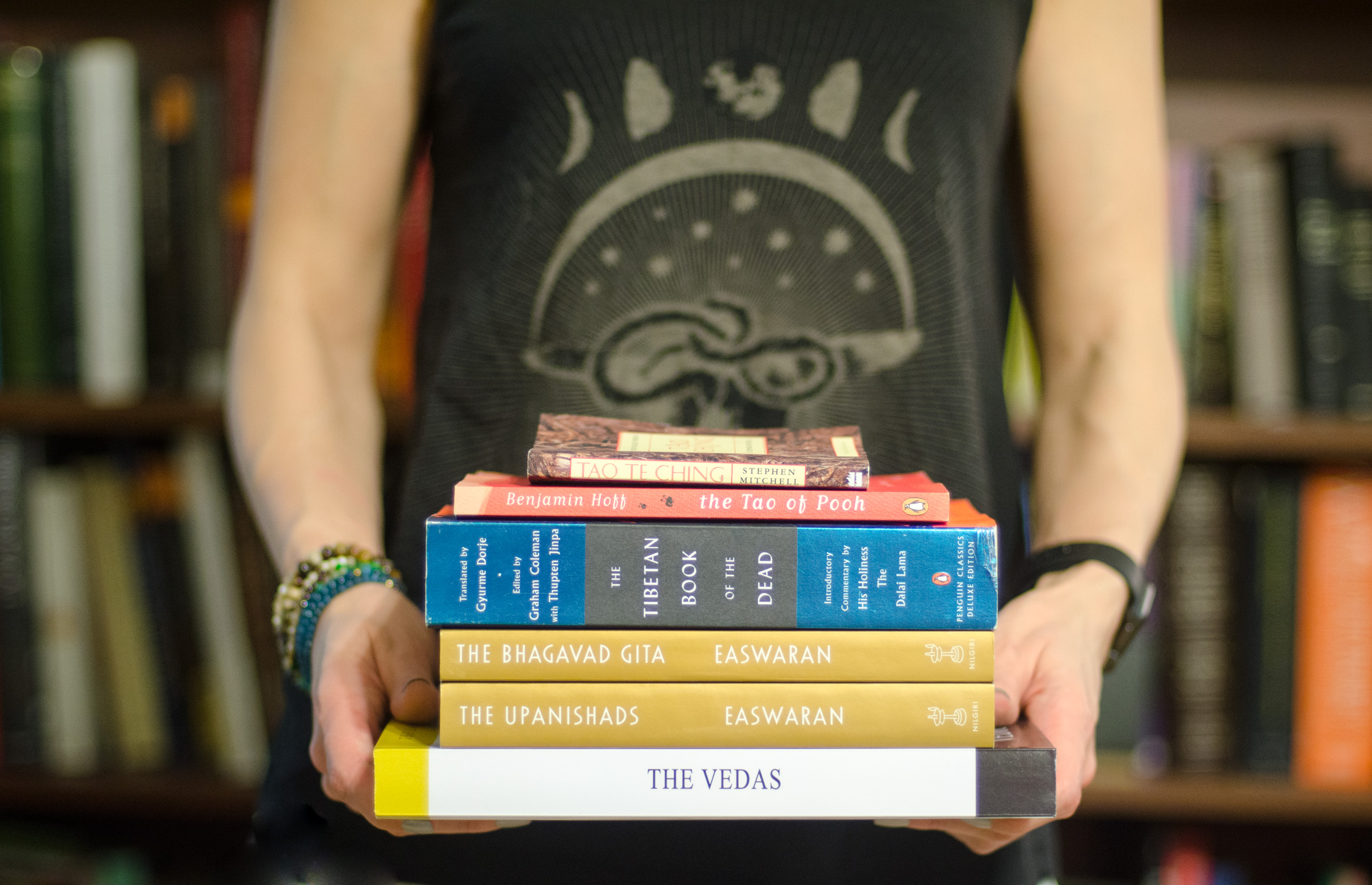 Ever wonder what the yoga teacher means when she starts talking about “dharma” in the middle of practice? For one thing, she’s helping to keep your mind off a physically challenging practice. But there’s also this whole other world to yoga outside of the asana practice. Yoga isn’t specifically religious, but it has developed alongside some pretty interesting spiritual practices from the East. This yoga philosophy reading list is a good start for anyone who wants to learn more about the some of the ideas brought up in yoga.

Let’s be honest, though. Who has time to read all of these? I wish I did. Luckily, it’s pretty easy to find most of these ancient texts as audiobooks online. If you have a long commute to work like me, just put them on during the drive. You could easily work through this whole list in less than a month.

The Tibetan Book of the Dead, also known as The Book of Living and Dying or the Bardo Thodol, describes the experiences consciousness has after death in the interval between death and the next rebirth. The Bardo Thodol is a text from a larger work called the Profound Dharma of Self-Liberation through the Intention of the Peaceful and Wrathful Ones.

Tao Te Ching, or The Book of the Way, is a brief and classic book on the art of living. It examines the human condition and delivers balanced advice for a generous spirit in return. I love to carry this book around with me in my pocket, purse, or desk. It’s perfectly compact! Each passage is like a wise little succinct poem.

Tao of Pooh by Benjamin Hoff

In the Tao of Pooh, a pun on the name of a great Tao master Pu, the ideas of Taoism are narrated and illustrated through the world of Winnie the Pooh. I had a hard time with this one. The childlike narrative was hard for me to work through, but the nuances of Taoism are so interesting. Definitely worth a read.

There’s no audiobook on YouTube for this one! You can find it on the Amazon store through the link above, though.

One of the most famous Indian scriptures, the Bhagavad Gita tells the story of Prince Arjuna conversing with his spiritual guide Lord Krishna in preparation for a great battle against his family. The text details specific ideas of Hindu religious thought and what yoga is. My favorite part of this book is the concept of dharma, your life purpose or destiny. This can mean a number of things on an individual level. Basically, dharma is inescapable and must be pursued with absolute commitment.

The Vedas by Anonymous

Written during the Vedic period roughly 1,000-500 BC, the Vedas are ancient Hindu scriptures intended to bring the language of the Gods into human language. There are four Vedas: the Rigveda, Yajurveda, Samaveda, and Atharvaveda. Sanskrit is a beautifully lyrical language. Without a doubt, anyone interested in learning more about the nuances of Sanskrit and the philosophies of Hindu sages should check out the Vedas.

Another spiritual text from ancient India, the Upanishads record Q-and-A sessions between sages and their pupils. This series of texts are often called the Vedantas, or the last part of the Vedas, and cover some central concepts of Hinduism like Brahman (Ultimate Reality) and Atman (Soul, Self).

Many modern and ancient philosophers have been inspired by the Upanishads and other Indian scriptures. You may also see direct parallels between these texts and ancient Greek philosophers and allegories by scholars such as Plato. Was there any overlap between these ancient cultures? History doesn’t confirm this so far, but it’s at the least comforting to find threads of continuity in the lessons learned from each culture. One of my favorite things about yoga is the way it gives such practical guidance on how to treat yourself and others, look inward, know yourself, and live better. I did my best to describe the spiritual concepts in the above. Hope I didn’t butcher any of them! By no means have I extensively studied these texts.

Anyway, there are so many great yoga books out there to cover. If you like this list, you may also like my Yoga Teacher Training Book Reviews and Yoga Book Reviews list and Let me know if you have any other favorites I should add to this yoga philosophy reading list. I’m always looking for a good read!